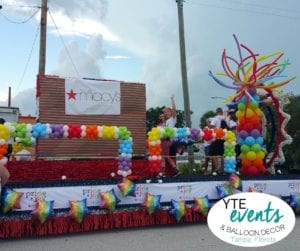 Pride Month means so much to those in the community. This is especially true for LGBTQ-friendly in Tampa! So, when Macy’s needed help getting their float for the parade gussied up, YTE Events was there to help them dazzle and amaze!

For Pride, it’s always go big or go home! Balloons that are all the colors of the rainbow were arranged in arches that bordered the side of the float. Alternating between colored and white balloons helped emphasize the color change, and draw the eye towards these brilliant structures. These arches ran down the length of the float, with gaps large enough for the riders to step on and off the float.

Large pride palms, made of larger balloons than the arches, occupied the corners of the float. These ten-foot-tall beauties were topped with long, skinny balloons to get that palm frond appearance Tampa residents know all too well!

Foil accents, like the star-shaped pride balloons running the side of the float, helped round out the appearance. These balloons were spaced out across the “Pride + Joy” side banner so that it was easy to see what Macy’s was all about for this parade.

All in all, this was a wonderful float to work on, and to see in the parade! Although the clouds tried to dim the show, the glitz and glam of Pride couldn’t be stopped that day!