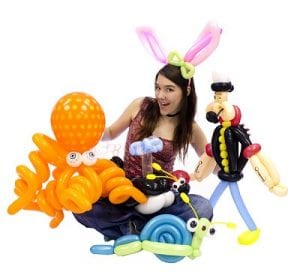 Shaping special modeling balloons into entertaining shapes is an exciting birthday party activity that has been gaining popularity as time goes by. Balloon artists are a children’s favorite in many parts of the world. This art of balloon twisting probably first originated many centuries BC which makes it not only intriguing but fascinated as well. We thus delve into some amazing facts about balloon twisting.

Nobody Really Knows Who Made the First Balloon Animal!
No one has been officially credited as being the original creator of balloon animals. Nonetheless, according to some historians, professional balloon artistry might have begun with Herman J. Bonnert from Pennsylvania. Petri’s “Jolly the Clown” book, as well as an Encyclopedia called “Manual of Balloon Modelling,” stated that Herman showcased balloon modeling in 1939 at a magician’s convention. The controversy, however, is that other folks such as Henry J. Maar- the Sultan of Balloons and Frank Zacone might have been bending balloons long before Herman’s show at the magician’s convention.

The Art Might Have Been Discovered by Accident!
One of the supposed inventors of the art of modeling balloon was Henry J. Maar. He, in fact, has been referred to as The Sultan of Balloons. Henry was a great vaudeville magician loved by many. Unfortunately, one day, a thief came along and stole every single one of his props but the balloons. Henry was a firm believer in the saying, “The show must go on.” He, therefore, improvised using the balloons and created an act that later gained fame as balloon art.

All That an Artist Needs Is Balloons and An Inflation Device!
Balloon twisting is very entertaining to children. It, however, is one of the simplest acts that an entertainer can perform. Only two tools are required; balloons and inflation mechanisms! The rest is up to the artists to decide. There are special balloons for these shows. Some are extra-long and come in unique colors. Twist-and-shape balloons are what most artists use. While some entertainers simply inflate balloons with their mouths, most artists also have hand air pumps.

A Single Balloon Model May Require More Than One Balloon!
While it is possible to construct balloon models from a single balloon, some of the coolest designs utilize multiple balloons. Most four-legged animals are single-balloon sculptures, but many other models such as flowers, trees, birds, etc. need extra balloons. Some models even can take up thousands of balloons and fill up entire convention halls!