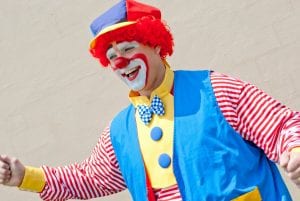 Are your kids ready to have mind-blowing birthday party fun? Yes? Great! At YTE events we have the finest array of party clowns that are excellent entertainers for children. Kids like laughing. Clowns specialize in cracking up kids and making them appreciate the wonderful pleasure of being young. When a clown comes to a birthday party, he or she is focused on achieving one main objective; to make everyone laughs till their ribs hurt!

Every clown is artistic in his or her own way. However, there are different variations in their dressing and acts. This leads to very distinct clown types. One of the children’s best favorite is the white-faced clown. This is no brainer; the white face clown has a white face. Other facial features are usually accentuated differently to either make them either grotesque or neat. A typical costume for the whiteface clown is one piece. Many other variations do exist all the same. A unique feature of whiteface clowns is that they go big on flashy accessories such as rhinestones and sequins.

The beginnings of white-faced clowns date back to as early as the 1700’s. There’s evidence that commedia dell’Arte performances pioneered whiteface clown shows. Pedrolino was probably the first whiteface clown. His character was young and simple-minded. His mask was equally simple: merely a powdered face. The French theater later adapted this character and turned it to Pierrot.

The Roles of Whiteface Clowns

Take any group of performing clowns, and you will realize that the whiteface clown appears to control the acts.  He appears to be the boss clown in charge. Compared to his comrades, he seems to be the smarter one. He, therefore, will be seen setting up pranks (most of which always backfire) or directing traffic in skits.