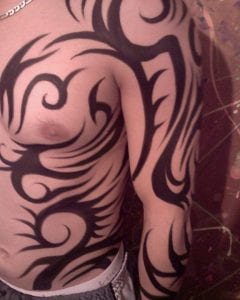 The Vibrant and Multi-Cultural History of Body and Face Painting

Body painting is a temporary art form that been used by many indigenous and modern cultures for a variety of reasons. Body and face painting was used to ritualistically in indigenous tribes all around the world, in locations such as North America, South America, Africa, Australia, Polynesia, Papua New Guinea, Oceania, India, the Middle East, China, Japan, and more. In fact, most tribal cultures exhibited some form of body painting either with earth, plant, or animal based pigments.

An important part of the daily life in many of the indigenous tribes of the world is the use of body and face painting. It can denote status within the tribe, celebrate certain rituals or special events, or prove that someone has passed their rite of passage. A rite of passage is a ceremony that takes place in many tribes that mark the time after which a child is seen as becoming an adult, but can also be associated with other landmark events in life. For example, a wedding, the birth of a child, spiritual rituals, and preparation for the hunt.

Your body paint can also serve to show status within the tribe, such as demarking someone of high status such as a chief. It can show others that you are in mourning so that they do not bother you while you are grieving. Spiritually, it helps the tribal members ward off evil forces and connect with the spirits or gods they worship. For example, the Aboriginal people of Australia decorate their body with a white clay in such a way as to eliminate the identity of the individual wearing it by disguising his appearance as much as possible

Body and face painting materials were often manufactured from elements in the earth, pigments obtained from plants, animal byproducts, or occasionally other sources such as shellfish. In India, body painting used to be used to denote where one belonged in the social caste system. The paints used for this called Henna, which is made from the Lawsonia Inermis flowering plant. When performed properly, this form of artwork is beautiful and the stain from the pigment lasts about 2 weeks.

Body paints in the pre-modern days were most often manufactured with plant and animal dyes, and would be used to signify different ranks within the tribe or as part of a celebration. In India, body paint was used to denote social caste, while in multiple cultures the paint was used to signify special occasions such as getting married. In South America, the natives used charcoal for their markings, and they extracted an orange pigment from the Bixa Orellana tree. Like modern body and face painting, these pigments washed off easily with water and some gentle scrubbing.

The Modern Revival of Body and Face Painting

The current modern revival could be said to date back to the 1933 World’s Fair in Chicago. A famous inventor named Max Factor Sr. of cosmetics created a full body paint and exhibited it at the World’s Fair in 1933. Though allegedly any publicity is good publicity, the use of model Sally Rand and the method in which she was painted caused such shock and disturbance that she was arrested four times in one day. Shock of this public marketing stunt did not manage to popularize body painting in the west, but it brought it to the minds of many future artists.

Many of these western artists started to take advantage of this new medium in the 1960s. Artists were trying to find new ways to manifest their artistic vision and came across face and body paint. Famous artists such as Yves Klein and the supermodel Veruschka were well known for their art projects in this new media. Yves Klein even used a specific color of synthetic aquamarine so much in these projects that it ended up being names after him, International Klein Blue.

Body and face painting is often used at events to entertain guests. From massive carnivals to private events, you can get your face painted anywhere to add a bit of fantasy to your outing. It is notably frequently used in protests and rallies to gain political attention towards the participants from onlookers, whose senses can be shocked by provocative displays. Similarly, it has been used in flash mobs with little or no political agenda, just gaining attention for the sake of attention.