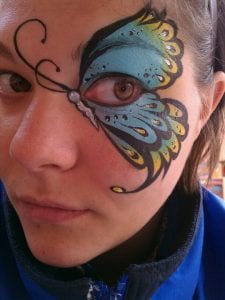 The Modern Revival of Body and Face Painting

Face painting has been used for thousands of years by indigenous people to celebrate rites of passage, denote status, and proudly display that one has achieved other milestones in their life such as marriage or having a child. The modern world has distilled the celebratory element from this and made is a fun activity for the whole family.

We are used to face painters at picnics, birthday parties, and corporate events. However, it has a rich and complex history as a modern reactionary art form that is worthy of a brief history lesson.

The first mention of westerners using body or face paint was at the 1933 World’s Fair in Chicago. A Mr. Max Factor Sr., a well-known inventor in the cosmetics industry, innovated or created a full-body cosmetic paint that he thought would be a hit at the World’s Fair. Now, while he was correct about the amount of attention he would receive, his choice to use well-known model Sally Rand by painting her in provocative ways caused much commotion, and the paintings caused such a disruption of the events at the fair that Sally Rand was arrested four times in one day. Unfortunately this did not popularize face painting or body painting until much later, but it did plant the seed of creativity into the minds of artists born in this era.

Many of these western artists started to take advantage of this new medium in the 1960s. Artists were trying to find new ways to manifest their artistic vision and came across face and body paint. Famous artists such as Yves Klein and the supermodel Veruschka were well known for their art projects in this new media. Yves Klein even used a specific color of synthetic aquamarine so much in these projects that it ended up being named after him, International Klein Blue. He would also take plaster molds of famous statues and paint them in his infamous blue, and later would paint live models and use them to develop an imprint onto a large canvas.

Also known simply as Veruschka, she is a multi-talented celebrity and model who has been active since the 1960s. She performed her first body-painting piece in 1966. It was such a hit that later in 1970 she decided to work on a book entitled  Trans-Figurations, a collaboration with Holger Trulzsch, who is a prominent painter and photographer. It was considered an immensely popular book, and inspired many similar attempts at reviving Body and Face Painting by melding it with photography.

Now we have very talented artists stretching the limits of body art, face painting, and sculpture all the time. Check out some of these awesome photos of body art pieces painted by professional face painters more recently.