Contact Juggling is a method of entertainment that focuses on manipulating an object, usually some sort of sphere, while keeping it in contact with the body of the performer. There are three main techniques of contact juggling used to manipulate an object in a visually stimulating way. Body rolling, the first of these, is fairly self-explanatory: the performer literally rolls the orb up and down his various body parts gracefully, such as from the palm to the elbow and back, or from the palm to the back of the hand. The second, palm spinning, refers to rotating the spheres in one or both hands fluidly, such as making a pyramid out of one stacked on a triangle of three and rotating the base three. The third, isolation, designates a series of ways to maneuver the contact juggling balls so that one of them remains in one place, such as giving the illusion that it is levitating or manipulating other spheres around it. 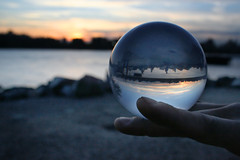 While these tricks may be simple to describe, the art takes a high amount of dexterity, skill, and practice in order to maintain this illusion.  Michael Moschen, the man who popularized the art of contact juggling, had been practicing juggling with his next-door neighbor Penn Gillette since 1967. Many people became fascinated with this obscure performance art after seeing the film Labyrinth, in which there is a scene where Michael Moschen manipulates a crystal ball with his hands through the sleeves of David Bowie’s character Jareth, the Goblin King. This character used the sphere throughout the film as a symbol of the dreams of the main character and as a manifestation of the magical powers of the Goblin King. In some performances a simple crystal sphere can remind the audience of these mysterious and magical qualities. 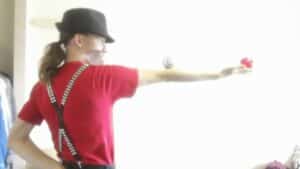 In 2010 Contact Juggling was made popular once more. A widely marketing campaign for a contact juggling ball called “the Fushigi Magic Gravity Ball” featured the “face of  Fushigi,” the Amazing Kenny, a talented contact juggling performer. Fushigi continues to see commercial success to this day, inspiring young new performers to try their hand at the art.