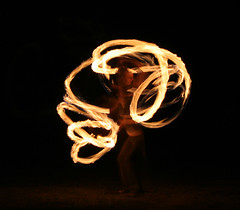 Cultures onward since the dawn of civilization have used fire for creative expression. Elephant herders in India spun flaming torches in one of the oldest known instances of fire performance. Persian history cites fire bowls used in belly dancing. The ancient art of fire breathing may well explain the near-universal archetype of the fire-breathing dragon. Poi (also called Fire dancing) is a form of dancing that has recently had a surge of appeal in the electronic music scene. “Poi spinning is a fun and beautiful way to express yourself through dance. Poi are weighted balls at the end of strings, often with ribbons or flags attached, that are swung around and spun in beautiful patterns”

The History of Fire Poi

Poi started with the Māori people of New Zealand, where people practice it to this day. It has however also gained a following in many other countries. The expansion of poi culture has led to a significant evolution of the styles practiced, the tools used, and the definition of the word “poi.” As a performance art, poi involves swinging tethered weights through a variety of rhythmic and geometric patterns. Traditional poi artists may also sing or dance while swinging their poi. Poi can be made from various materials with different handles, weights, and added effects such as fire.

The traditional poi is a light ball made of “raupo,” a swamp plant, which is affixed to a rope made of flax, which can be either long or short. The word “poi” is used in Māori action songs and dances which originate from the archaic “Poi Toa”.

These artifacts were used prolifically during the times before the European colonie.  Māori men, woman and children, utilized poi in games and physical exercises to sharpen reflexes, increase flexibility and improve coordination. 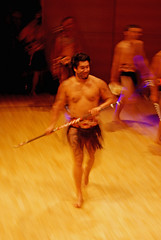 Poi Toa originate from the ancient “ki”. These were small woven flax baskets used to carry a the egg of a single Moa, which was a large flightless bird which is unfortunately now extinct. To ease carrying, two or more ki would be joined by a length of plaited flax rope and slung over the shoulders or around the neck.

Today the term “ki” refers to the head of the Poi Toa.

Skills developed while practicing Poi Toa were transferable to weaponry use and fighting techniques.

Poi Toa used commonly today have just one “ki” and one rope “tail”.

In martial arts type exercises, the “ki” is often heavily weighted with a stone, to increase resistance and power, with ropes one to five metres long. Poi Toa used in kapa haka, a performing arts. and games have lightly weighted ki with ropes less than one meter long.

These uniquely developed Māori implements have also been popularised around the world in the form of “fire poi”, and are also used in aerobics classes and gymnastics disciplines. 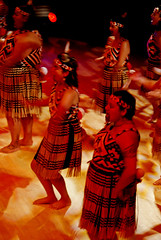 Māori had names for each Poi Toa exercise, these varied from tribe to tribe, and as we have seen with the development of “fire poi” worldwide, the names of such exercises is better understood from within a local context. So it is a good idea to make up names, from the games examples following, which are suited for your own adherence.

The Evolution of Poi

The first known fire poi shows were part of private men’s rituals in Hawaii. The first public appearance of these rituals started around 1959 and became a tourist attraction by the early 1960s.

Because of the similarity in the light shows between fire and modern chemical or LED glowsticks, poi dancing was adopted readily by the culture surrounding raves and other electronic music events. Due to the nature of this form of dance and the physics involved with manipulating weighted objects on a length of chain, rope, or a stick, percussive beats have always been the preferred music by which people choose to perform. As techno came about in the late 1980s and early 1990s, the rhythmic drum beats and lack of syncopation present in most songs led to rave performances using other light emitting devices while utilizing the basic moves of poi dance. 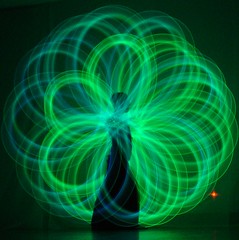 Glowstringing is defined by a few factors: the use of glowsticks on a string, the swinging motion, and an equally large growing category of moves and concepts that share many of the same aspects as many other stringing related fields, such as poi, yo-yoing, and martial arts forms common with swords, flails, and rope darts, is typically done with glowstick or glowstick-like instruments tied with a durable string at the end of it. In some case, handles may be used, because of moves which favor the fact that the glowstick handle can be grabbed and switched with the swinging part. In some cases, because of the existence of handles which glow both ways, moves which “throw” can be accomplished as it can be grabbed on either side. Glow performers can take glowstringing to a whole new level.