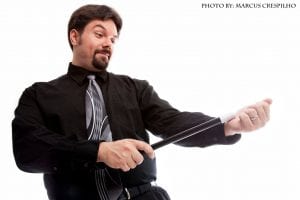 It is often clichéd that we are all children at heart. It’s been quite a while since the child in me last awoke. However, recently I attended one of the most entertaining in birthday parties of my life- a birthday party to celebrate my niece turning 9. The party was unlike any other I have attended so far. It was filled with comedy, laughter, good food, delicious snacks and on top of all that there was a magic show that completely blew my mind. The show was put on by none other than Orlando’s finest, William Green.

Great Audience Participation
William did quite a fantastic job of keeping everyone on the edge of their seat. His magic was downright amazing. I honestly didn’t know that a magician could indulge the audience so expertly. His humor was classic, original and personalized to the participants. Almost every kid at the party enjoyed a close encounter with William’s stunning tricks.

Funny is William’s Middle Name
William knew how to tickle everyone’s funny bone too. He knew how to bring down the entire house with laughter. At one time, my niece was laughing so hard that she was crying. She was not alone in this; by the time his show was over, my ribs were aching. As a king of magic, William is enjoyed by all and is guaranteed to have the audience in tears laughing.

He Truly Is a Great Performer
When he stepped into the party, William was well-set. He acts, and tricks were so coordinated that he had us all like puppets playing by his strings. There were no mishaps, and every act was executed perfectly. He had a diverse mix of tricks as well. There was magic everywhere in that room. There was table magic, impeccable standing routines and at times the magic was happening right on the hands of the guests.

William Green is a terrific entertainer and professional magician. He embraced magic from a tender age and has even opened his own magic store in Orlando. If you are looking for the best, most up to date magician in the area, William is your guy! To book him, just fill out the form on www.YTEorlando.com and he can send you a sheet with all of his packages and entertainment options!