A Brief History of Magic 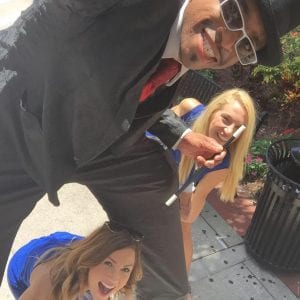 Illusions, spells, tricks and ceremonials are usually performed for entertainment by magicians. It is the seeming supernatural power which makes the impossible occur that makes magicians seem so appealing. Here we are going to go a little bit into the history of magicians. Not to be confused with the history of witchcraft, this article will be focusing on magicians as entertainers.

In ancient Egypt, there was a magician named Dedi who performed in front of a crowd, where he supposedly beheaded two birds and one ox. He eventually restored the heads of these three animals. Because of this, the Egyptians were considered to be the first magicians recorded in history. You can read more about the History of Egyptian Magic across the internet.

Continuing on the Timeline of Magic

As the popularity of magic developed, tricks involving cups and balls were shown to the public. Then, playing cards, silver coins and dice were added to their slew of magical tricks.

Later on, ancient Greek magicians invented tricks involving the human body. A trick where a performer thrusts a dagger through one’s arm without being hurt has been developed and shown in public places.

The ancient Chinese civilization also paved the way for magic. The “linking rings” is one of the earliest tricks ever invented. To begin with, a number of rings link themselves. The rings are made up of solid metal and the illusion is that they eventually unlink themselves. You can learn more about Chinese history regarding magic here as well.

One of the greatest magicians of all time is Harry Houdini. He started as a trapeze performer in the late 1800′s and eventually became famous for his magical abilities. He began as an “escape artist” who bonded himself using locks or ropes and eventually released himself.

Spanish, Italian, British, French and American magicians presented their acts as magic and regained a popularity in the 1920′s.

Sawing a Woman in Half

In 1921, the world first witnessed a magician saw a woman in half. British performer Percy Tibbles cut through a box containing his woman assistant. After the trick, she appeared without a harm. It was on 17 January 1921 at the Finsbury Park Empire, London, UK.

The first woman to be sawn in half was Jan Glenrose (in rehearsal) and Betty Barker (on stage). In this version the girl was entirely enclosed inside the box. The first performance of the version most widely recognized, with the head and feet protruding from the box, was by Horace Goldin (USA) on 3 June 1921 as part of the Society of American Magicians annual banquet at the McAlpin Hotel, New York, USA, but Goldin initially performed the illusion using a male assistant. You can read about this in the Guinness Book of World Records Online.

This trick became even more complicated when the woman assistant was ‘operated on’ with her hands, head and feet in full view of the audience. The assistant was sawed in half using a power-driven saw, and was later restored without a scratch on her head.

Spreading Magic across the world

Originally magicians were not paid for their work in theaters as they are today. They performed in open air markets where food and drinks were served to the public. By the mid-1900′s, they paved the doors for magicians to be ‘professional performers’ by requiring the public viewers to pay for watching magic shows.

In the 1950′s, television was invented so magicians were able to reach an even wider audience spectrum. During the 70′s, Siegfried and Roy re-ignited the interest in magical tricks by making large animals disappear. David Copperfield is also a major player in the field of magicians who offered great entertainment to the viewing public.