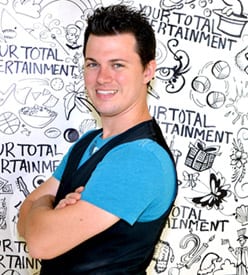 On September 10th, 2014 Jonathan Fudge and YTEevents were featured in the Laker, a Land O’ Lakes/Lutz publication. This is the article that was written by the talented Michael Murillo. It has been reproduced here to preserve the contents so that they do not get lost in the massive internet ether. You will first find a photo of the article with rewritten text below. Please feel free to share this to friends, family, neighbors, entertainers, and anyone else you think may enjoy it. We are super excited about the positive publicity and only hope to incur more positive vibes as time goes on.

Article is as follows:

As a balloon artist, Jonathan Fudge has to be able to field all kinds of requests like dogs, swords, hearts, and recently, a fire alarm.I said, “Tell me what’s important about a fire alarm to you,” recalled Fudge. And after hearing what elements clients wanted to see – a round shape, a place for batteries, a test button – he got to work immediately.”I made it happen  for him,” he said. “That’s my job.”

Fudge, who attended Land O’ Lakes High School and lives in Lutz, has been creating balloon art for most of his life.

I used to be the best, youngest balloon artist in the world. But then I got older,” he said with a laugh.

Now 28, Fudge started making shapes 20 years ago and has been working events since he was 16. It’s taken him to places like Belgium, China, and Japan. He’s also turned his love of entertaining into a larger, thriving business.

His company, YTEevents, boasts a stable of more than 130 performers who entertain at parties, celebrations, school programs, and corporate and charity events.

One upcoming charity on YTE’s schedule is the Cheval Cares 5k and Family Fun Day on September 20th. Now in its third year, the event – at the Cheval Athletic Club in Lutz – benefits the Pediatric Cancer Foundation.

YTE – which stands for Your Total Entertainment – participates in a number of charitable events that benefit groups like Metropolitan Ministries and Suncoast Hospice. For Fudge, it’s just part of helping others in the community, his entertainers, and the people who enjoy them.

“I got my start through a charity,” he said. “Someone taught me for free, but I’m not the only one who’s been touched by that.”

“When I can give my entertainers an outlet to do something they love, and to share what they love with other people, that skips over all kinds of boundaries.”

Even non-charitable events allow his performers to get the satisfaction that comes with entertaining others with their special skills and abilities.Fudge’s stable of performers includes superheroes and princesses (some might bear a resemblance to famous names, but aren’t specifically representing characters who would cost a lot of money to license) as well as mermaids, magicians, ninjas, jugglers, and face-painters. He works out of his home, matching the right entertainment to specific events, as well as performing balloon art himself.The company handles around 50 different events each month, he said.

Fudge himself heads out to his own gigs making balloon shapes. The art form has changed a lot over the past few years, he said. In the past, one could get away with making basic shapes using just one balloon, but people expect more definition and complexity today and that means staying on top of trends, learning new styles and being creative on the fly.

Fudge has fielded unusual requests like lawnmowers, and vacuum cleaners, and participated in creating a dress made out of balloons.

Running his business isn’t easy, either. In addition to the 20-25 hours he spends doing balloon art, he can invest as much as 80 hours per week keeping things running smoothly and making sure the right entertainment is placed with the right event.

Finding high-caliber talent is a challenge as well. It’s one thing to run across someone with a nice costume and the right look, but entertaining at an event takes more than that. And Fudge doesn’t let just anybody join the team. He’s very picky, and is looking for performers who have a natural ability to interact with people in an entertaining and positive way.

“And someone who really loves what they do. If they’re in love with the character they’re trying to portray, then they’re going to portray them in a much more realistic and believable way.”

Fudge’s team is filled with performers quick on their feet, and willing to do a bit of acting to really adopt the image they are displaying at an event.

The end result is a strong group of hand-picked performers who share a passion for their craft and appreciate the opportunity to share it with the public. And beyond the costumes, balloons and other props, Fudge considers that passion to be his company’s biggest asset.

“There are other agencies in the area and elsewhere,” he said. “But I think what sets our agency apart is the fact that everyone in my company loves what they do.”

You can also read the source article at Laker Lutz News