Award Winning Author –
Alexandra Zayas is an award winning writer who wrote an article about my balloon business in Tampa a few years ago. It wasn’t until most recently when I figured out just how many awards she had really won!

I remember her as a kind, fun-loving reporter sitting at our kitchen table asking me questions about what I did, why I did it, and some of the more enjoyable moments in my career. I thought she was one in a million as I had just finished with a few other reporters at the time. Boy was I wrong! I did an event for a few photographers at the Tampa Bay Times this past weekend and found out that EVERYONE on their staff is fun and a pleasure to be with.

I also found out just how much of an honor it was to be written about by Alexandra. Just five days ago she won the Livingston Award which honors “outstanding achievement by professionals under the age of 35.” She is also a finalist for this year’s Pulitzer Prize for investigative reporting, and the winner of the Selden Ring Award for Investigative Reporting.

If you wish to share with Alexandra one of your untold stories, you can contact her at the information below. She is always looking for ideas in the greater Tampa Bay area. 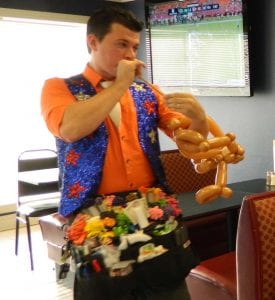 The Balloon Story she wrote was found in the Tampa Bay Times and can be read below or visited at the following link:
http://www.tampabay.com/news/humaninterest/florida-artist-builds-sculptures-that-take-his-breath-away-balloon-art/1055114

LUTZ
Jonathan Fudge sleeps among balloons, thousands and thousands of them, grouped by color, lined up in rows, stuffed into boxes and stacked by his bed. When their time comes, they’ll fill his apron in slots assigned to each type — opaque and clear, powder soft and squeaky, yellow and marigold.

They’ll hang out like long, skinny snakes until he needs one. He’ll dip in, pick it out, blow it up. He’ll twist it into a monkey, or a motorcycle, or a monkey riding a motorcycle flinging poo. And he’ll give it away.

Like the time he built a life-sized balloon statue of Ernest Hemingway, in a Key West scene, surrounded by eight palm trees, a macaw and a six-toed cat.

Or that time he built a 12-foot-high replica of the Beatles’ Yellow Submarine, complete with windows, a tail and periscopes shooting out the top — using just those strings of latex, the occasional pump, a little help from his friends.

And the air in his lungs.

At 23, Fudge looks back thousands of balloons ago to his very first. It was magic camp. He was 8, and a lousy magician.

The head magician, a big man named Daniel P. Fite with a Capt. Kangaroo moustache, also twisted balloons. He gave one to Fudge and told him to come back when he’d blown it up.

It took the boy a week, and it showed. The balloon was ugly, deformed. He handed it to the moustached magician.

The man ripped it in half.

Fudge’s heart sank to his stomach. But before a tear could come to his eye, Fite took one balloon in each hand, simultaneously blew them up and tied them. And with swift twists of his fingers and flicks of his wrist, turned them into two dogs.

He returned to camp every year after that. And sometimes, he followed the magician to theme parks like Disney World, where they would make swords and flowers and hearts for people standing in line. At 15, he made his first tip: $5.

A year or two later, a relative asked him to talk about balloon art at the Great American Teach-In. He needed some expert advice, so he put out a message on the Internet. A woman known in the balloon world as Grandma Maxine Baird wrote him back. She had been looking to sponsor young artists. She told him she would pay his way into a face painting and balloon conference in Orlando. All he had to do was bring fudge.

So the teenaged Fudge showed up with his fudge and stepped into another world.

The hallway was lined with what looked like mannequins. They were human models, standing very still, being painted from head-to-toe. As Fudge walked past, artists begged him to stop, saying they needed another body. But he kept walking, toward a room he heard was the setting of a “balloon jam.”

Think of a jazz jam, people playing their own instruments, exploring their own creativity, synching up if they find a vibe they like. The same is true for balloon jams — you start with small pieces and build as you go.

Evidence exists that the Aztecs once made balloon animals out of the inflated bowels of real animals. But the art of rubber balloon twisting is only a half-century old. And it’s evolving exponentially. Balloon hats and toys have grown into haute-fashion costumes and sculptures bigger than buildings, made for high-paying corporate sponsors.

Some of these ideas are born at balloon jams.

“I get to the balloon room,” Fudge remembers, “there’s a couple of clowns sitting in the corner, Elmo Twist and Peaches. They’re seasoned clowns. They can’t drive at night. Elmo Twist taught me a balloon swallowing routine — for adults only.”

The room was full of such characters, people Fudge would later learn were big deals in the balloon world. He taught one how to make a snail out of a balloon. They didn’t tell him who they were, but they liked his enthusiasm for teaching. He was in.

At a later convention, one big-deal artist asked if he wanted to help create an installation. He did. It was a castle, complete with a long-haired Rapunzel and an alligator swimming in the moat.

He was still in high school, balloon-twisting at five or six restaurants a week, making $150 in one night, what he made in two weeks working at Domino’s Pizza.

Fast-forward to early this November. Fudge stared at a small toy replica of the Yellow Submarine. He was being paid to copy it into a really, really big balloon version for one of the biggest social events of the year, the Make-A-Wish Ball, where the best tables went for $20,000.

Gone were the simple days of sword balloons.

By now, he’d fulfilled even the strangest on-the-spot balloon twisting requests: a life-sized bed that floated on water, a refrigerator, a banana hammock — “that’s a banana in a hammock. I made it clear I wasn’t going to make anything else.”

He had worked for agencies and started one himself, trained artists who went on to train other artists, stood on a street corner in Okinawa, Japan, making mostly butterflies and octopuses, since those were the only Japanese words he knew.

And now he had landed the submarine gig. He teamed up with master artist John Watkins and brought in a third guy to help blow balloons.

After staring at the toy, they broke its shape into parts. The base looked like a big, yellow whoopee cushion. They started that first, and they kept building — filling balloons with enough air to create a full shape, but not enough to make it pop when twisted.

They inflated 800 balloons. They worked 77 hours.

The party’s theme was Imagine. A big sign announced “All you need is LOVE.” The LOVE was made completely of flowers. In the middle of the ballroom, a big disco ball hung from the center, projecting images of the Beatles.

And the Yellow Submarine needed to make an entrance.

The song blared. The crowd parted. A parade of stilt-walkers and Beatles bobble-heads built up the crowd. Then the giant submarine floated in, swimming above their heads.

They didn’t realize it was made of balloons until it got closer. The people who have everything were astounded. Oohs were oohed. Ahhs were ahhed. Camera flashes twinkled. Under it all, Fudge raised and dropped his arms like waves as he held his submarine.

He wouldn’t see his work after this night. And it wouldn’t last much longer than that. But right now, in this moment, the exhausted balloon artist reminded himself to smile.

Your Balloon Man
To contact balloon artist Jonathan Fudge and his Tampa entertainment agency, which provides other types of entertainment as well, visit www.YTEevents.com or call him at (813) 310-5900.