This was a great event that we had a lot of fun putting together. Between the design process and the actual building of all the decor, we had a blast transforming the Indian Cultural Center into an amazing feat of balloon decoration. It started over a month ago as we planned the Jungle themed decor around the small stage area they would be highlighting. They were looking for palm trees, lions, giraffes, and other jungle animals to accent their party. The client was also interested in making sure the ceilings and the walls were covered with balloons so that the whole room popped with excitement and color.

Getting straight to the fun part, here is a photo of the balloon backdrop we did for the stage as well as the palm tree accents we included. As you can see, we also included some animals and some grass to decorate the floor and the bottom of the stage. This was the centerpiece of the room and where all the focus was directed for the decorations. 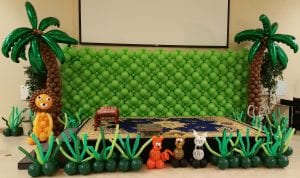 On the opposite side of the room, at the entrance after you walk in, you could see another small jungle theme to tie everything together for the room and create a full jungle atmosphere. This scene had a giraffe, palm tree, and a number of little grass pieces for the floor. It also doubled as a photo opportunity for the guests as they entered the room and became engulfed in the forest of balloon trees we set among the venue. 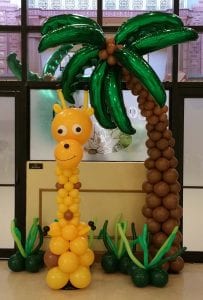 On the opposite side of this figure was the door and the main entrance for the guests arriving. We decided upon a very simple entrance with a display piece letting people know it was for a baby shower. This simple piece was to tie the decor together and to give a sneak peak at the fun that was going to be inside the room. It had the “Welcome Baby” foil balloon on top of a column as well as a palm tree behind it. It filled the space between the two sets of double doors and it gave a welcoming atmosphere as people entered the room as well. 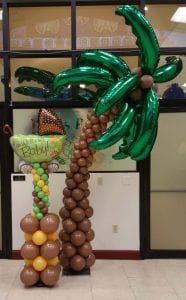 The next thing we put together for the baby shower were a number of pieces of ceiling decor which hung around the room. We placed 18 different balloons around the ceiling to accent the space. The light blue and dark blue added to the look of a sky and also tied into the colors of the linens on the tables and chairs. Each of these large balloons was blown up to a whopping two and a half feet in diameter. They were huge and made just as big of an impact as party guests entered the room. In this photo, you can also see a few of the palm trees which sit on the tables and which line the back of the room near the door. It was meant to feel like they were literally walking into a jungle of trees and fun. We kept slightly to a palm tree look as the party was in Florida and we felt it fit their theme nicely. If you look at the back of the room in this photo, you can also see other types of ceiling decor that we did. We put together seven different pieces on either side of the room. It was meant to tie in the forest theme as well as the colors of the other pieces of decor. As you can imagine from this picture, the guests of the baby shower absolutely LOVED the balloons we put up for them.

The decorations were finished up with about 12 different balloon palm tree centerpieces spread throughout the room. Each and every tree had a different animal represented on it. There were monkeys, tigers, elephants, geckos, snakes, and even a sloth! We took time to twist something special for each and every table getting a centerpiece. Below are a few of my favorite ones that were photographed. We did not get photos of all of them as we had another event to get to, but it was still tons of fun to twist them. The next day, before the event started, we came back and added some more to the pieces shown below. We added a second animal to each tree. So, some also got parrots, ladybugs, or something extra. The double animals made for a much more substantial centerpiece and we feel looked much better as they accented the tables.