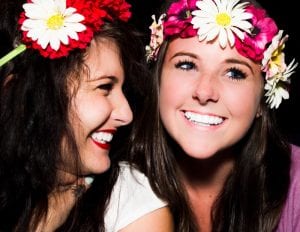 Planning the perfect party for an exclusively over 18 crowd can be a challenging task. Who can predict what childish behaviors an inebriated person might find amusing, but sober would find to be childish? Well, let us help you plan an exquisite party without you getting too stressed about thinking of appropriate adult birthday party themes. We can give you ideas for how to dress up, how to decorate, and definitely which cocktails to serve.

If you are feeling nostalgic, a decade themed event is always a timeless classic, especially among those who may be old enough to remember the good old times. There have been historic records of civilizations producing creative party themes for thousands of years, and I doubt that they will settle down any time soon. Now, the Prohibition era of the 1920s and 1930s is so fantastic for parties, I’m going to talk about it later in its own section.

The 1920s and 1930s are mostly remembered for the prohibition era, the rise of Jazz, and the grand extravagance of the Great Gatsby. Party-goers love to dress up for Prohibition-era parties, especially those hosted on the anniversary of the repeal of prohibition, December 5, 1933. When inviting guests, be certain to specify if it is a prohibition style affair or something where more formal eveningwear would be expected. Vaudeville acts were popular to entertain, so a hired birthday party magician would often surprise and delight guests with coin tricks, magically restored ropes cut by one of the audience, and the possession of a silk handkerchief with a mind of its own. Many thrift and vintage stores sell “grab bags” of jewelry for cheap that you could station at the entrance or at a photo booth as props. The same stores could easily help provide costumes or props to guests who wish to dress accordingly.

Now since the era was marked by the prohibition, which if you were unaware was a nationwide ban on the sale of all alcoholic beverages from 1920 to 1933, when it was finally repealed. Since it was illegal, people had to hide out in bars called “Speakeasies”, meaning to not speak loudly about where it is located or how to get in. If you want to replicate this feel, many speakeasies often made “bathtub gin” which was a slang term for their own home-made moonshine. You could easily slap a label on a punch bowl full of gin-based cocktail or an actual bottle of gin, but if you wanted to go all out you could get an actual bathtub filled with water and ice and have the bottles of beverages hidden in there, requiring a special knock to get access. Many speakeasies in film infamously used the “shave and a haircut – two bits” knock to get access to their illegal hooch. Cocktails and champagne were also very popular, anything made with whiskey was rapidly consumed and you can’t go wrong with the classic mimosa. Dances and gambling were both very popular, so whether you’re teaching The Charleston or placing all your chips on number 22, your guests will be equally amused

Luau parties fell into favor in the 1940s, and since times were so tough people needed a way to relax in style. WW2 Pinup girls such as Rosie the Riveter became celebrated by the soldiers returning from the war. Also, since the 1940s was also the rise of Hollywood, many of its more popular films are considered classics today, such as Casablanca, the films of Charlie Chaplain, and the Film Noir classic “The Third Man.” Any of these themes would make for a great party in and of itself, or perhaps even overlapped. A luau party makes liberal use of fake hibiscus flowers and leis, hired traditional dancers, and tiki iconography inscribed on poles or on the sides of wooden cups. The more creative ones can make use out of hollowed out coconuts with umbrellas as cups, or strung together as brassiere. If you require coasters, why not get some Hawaiian postcards laminated? People try to dress in grass skirts, Hawaiian shirts, khaki or white shorts and sandals as these were all popular as such events, and in the more modern iteration the previously mentioned use of coconut shells as a garment. Such parties would feature drinks with tropical fruit or, for adults, those made with coconut rum. Another idea from the forties is that of a USO show for the troops. You could have Army helmets or Navy caps available to guests and posters with Rosie the Riveter and other pinup girls, popular musicians and actors such as Frank Sinatra and Marilyn Monroe, and hire a live jazz band or burlesque troupe to keep morale high.  The 1940s was the golden era for cocktail creation, and many modern staples were invented in this time. Such classics as the Manhattan, the Martini, and the Singapore Sling were novel, and Mint Juleps were popular in the Southern United States. Daiquiris and Cuba Libres are popular for more tropically themed events.