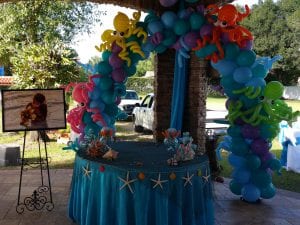 Pirates and Mermaids were all over the place for our special birthday girl! YTE Events and Balloon Decor put together columns and arches and then also organized (via YTE Events) a number of entertainers for her as well. The day for us started with the decorations. We put up a 20 foot balloon arch outdoors, covered in bright and colorful octopi balloons. We added swirls of color and even had eyeballs on the octopus balloons as well. They were so much fun that nearly everyone at the party stopped to look at them and take a photo. They may have been stopping by for some candy treats as well, but I like to think it was all for the balloon arch we put together for them.

We accented the arch with some balloon columns. One was topped with a sea horse and the other with a star fish. They were fun and exciting and everyone seemed to love them too. They also helped to accent the beautiful gazebo they had at their home where the bar was located for the adults and the desserts were located for the children.

The columns, of course, matched the archway that we made. They didn’t have octopi on them, but they did have other sea creatures to help build the theme. These were the underwater friends of the mermaid that showed up later. Yes, I did say mermaid! There was a real life, living mermaid that came and swam in the pool and interacted with the guests as well. I don’t want to jump ahead though. We started out with a balloon artist. Brandon from YTE Events came out and wowed the audiences as he made balloon pirate hats, mermaids, parrots, sharks, and other sea life to entertain the little ones. We love sending Brandon out because we always know he does a fantastic job!