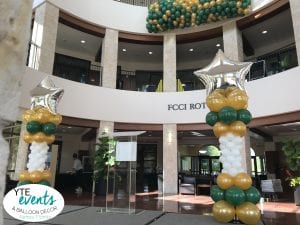 During the homecoming week for USF Sarasota/Manatee campus, we built a few balloon columns and installed a balloon drop to celebrate the announcement of homecoming court. The entire week involved special decorations, fun activities, and tons of balloons!

For this years celebration, we put together two star-topped balloon columns. The green and gold were accented with white and silver and found their homes atop the announcement stage in the main lobby. Once the announcements were made, the entire rotunda was filled with balloons as the drop was released and green and gold balloons fell to the ground in a sea at the students feet.