All About Helium Balloons 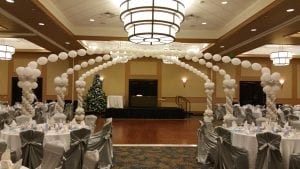 Helium balloon decor is likely what started all the fun around balloons being delivered for parties and events. The way it moves in the wind and floats magically in the air, helium helps to elevate the event to a place of awe and wonder that guests of any age absolutely enjoy. From the traditional helium bouquet delivery to the more outrageous giant balloon installs that require helium, there are tons of applications for the event and party scene. Here we will cover some of the options with helium, some of the reasons we choose not to use it, and some of the alternatives for helium in balloon decor. Spotted throughout, we will also add in a few charts and resources to help whether you are working with air-filled or helium balloons. No matter what your event or reason for checking out this page, feel free to contact YTE Events and Balloon Decor for any events you may be holding in the greater Tampa Bay area. We would LOVE to help with your event. 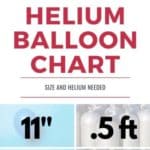 For those that prefer a more simple chart to understand the approximate cubic feet needed for each size of balloon, here is an image that can be used instead of reading through the complete chart above. This covers all the major sizes of latex balloons from 11″ up to 4′ balloons. Just click on the image and it should pull up the full photo to see everything in more detail. This is likely the only chart you will need for your party balloon needs.

Look below for a more detailed helium chart covering foil balloons as well.

Here is a small gallery of helium decor options to give an overview and idea of items that have been created (or can be created) with helium for an event. 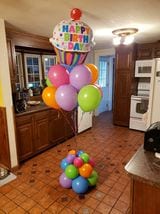 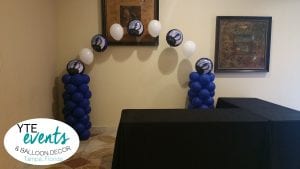 Though the traditional 4-pack balloon arch is no longer made with helium (except for extreme cases), the string of pearls arch is still completed with helium. This is created by using a line of monofilament similar to fishing line and tying the balloons onto it in even intervals. This creates a beautiful arching effect that works really well for decorating locations with balloons. There is also a very similar look that can be created using specialty linking balloons. The balloons are filled with helium and tied together to make a very similar effect to the string of pearl arch. This quick link or link o loon balloon arch is a very fun alternative that uses less plastics in the design and can help maintain a more green impact on the planet. Because of this, many balloon decorators have moved away from the traditional string of pearls design. Prices can vary based on the design but are often calculated by the foot or by the number of balloons that are used in the creation of the arch.

One of the newest fads in balloon decor are the jumbo balloons which consist of a giant 3 foot balloon on a string. These 36 inch balloons are often filled with confetti, smaller 5 inch balloons, or printed with customized logos. They also look really great with tassels on them. The jumbo balloons often will have numbers or the name of the guest of honor written on them in vinyl to help with customization. The helium used in these are approximately 16 times what it takes to inflate a 12 inch helium balloon. So, there is a much larger cost in helium for these than there might be otherwise. Prices are highly dependent on the amount of helium needed for inflation. If more lift is needed, then it is a much higher price. If only a little lift is needed, then sometimes a balloon decorator can use a partial mixture of helium in order to achieve results at a lower cost point. 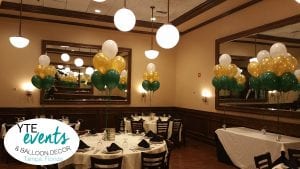 Though this is more of a use case than a type of helium balloon, balloons are often added to centerpieces to help bring height and movement to a room. When all of the centerpieces receive floating balloons above them, they start to look more fun and exciting than just smaller centerpieces on a table. The added height can add just the right touch to the room to help the guests feel like the ambiance is lifted to a much classier level. Aside from the price of the centerpiece itself, these are often priced according to the number and size of balloons which are added.

How much helium is in a balloon?

Here is a simple helium chart to help show how much helium is needed to fill a balloon of different sizes. We’ve included lift ability, float time, and differences when treated. Please note that these are all numbers based on ideal conditions and that temperature, humidity, and any number of other factors can help play a role in the longevity and lift ability of certain balloons. We’ve included latex, foil, and Mylar balloons.

Why should you NOT use helium?

Did you know that our universe is made up of nearly 28% Helium and that it is one of the most abundant natural gases in the universe? It is second only to hydrogen which makes up as much as 70% of the universe. The next most prevalent common element on the periodic table is Oxygen and it only makes up about 1% of the universe. Even with these amazing amounts of the natural gas available, Helium is a non-renewable, natural resource. Even though it is one of the most prevalent elements in the universe, it is mostly created now by the reactions that take place inside of stars by a process known as stellar fusion.

The pockets of it which we find on Earth are a byproduct of radioactive decay of elements like thorium and uranium. It is then collected, stored, distributed, and used as needed. This is mostly because it is extremely difficult to store. Needing very cold temperatures to remain in liquid form, long-term storage is very difficult.

Helium is used for many different things in our everyday lives. Here are some of the most common uses:

There is a helium shortage?

Even though there is such an abundance of helium in the universe, there is still a helium shortage for our current needs. This is mostly due to the locations of the gas supply as well as the difficulty of economic factors in collecting, storing, and distributing it. Much of the Helium collected by the United States between the Helium Act of 1925 and the Helium Privatization Act of 1996 was collected and saved by the US. Once the Privatization Act of 1996 was put into place, much of the helium prices were artificially lowered as the government was required to sell off all of its Helium reserves before 2015. During this time, demand for helium and creative uses for the gas exploded. Soon after, though, the prices skyrocketed and Helium became much more difficult to acquire.

Even if there is not an actual shortage of Helium, the prices have been driven up by so many factors that it is treated as such. More accurately, there is a shortage in available Helium at a reasonable cost. Previously, a helium tank may have been closer to $75 whereas the same tank might be in the $300 – $400 range now. This drastically changes the prices for balloons at parties as well as gas for other applications.

Alternatives to using helium in balloons

There are many options for air-filled balloon decor, even more so over the past years that the industry has been pushing to ban the use of helium whenever possible. The easiest way to eliminate the need is to create alternative  framing options. This is what we did with balloon columns and arches and why they are so popular at parties and events. The same thing can be done with bouquets and centerpieces. We also can achieve the height desired by using balloons that hang from the ceilings. With all the options available, there is no reason that helium needs to be used for most of the events decorated for.

YTE Events and Balloon Decor has become an expert when it comes to rigging air-filled decor and prides itself in being able to find helium-free options for events and venues. Why? Because there are many reasons why helium is not great for a venue:

If you would like to find out if we can decorate your event with or without helium, please let us know. As a Tampa Business, we specialize in events in the Tampa bay area, but are happy to help if you need assistance elsewhere. Just contact us via our contact form.