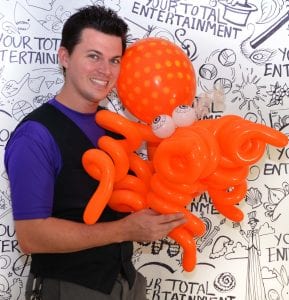 Mr. Fudge, balloon artist and entertainer out of Tampa, was covered in a front page story about balloon artists and their craft in the Wall Street Journal.

Having twisted balloons for a number of years, it was a great honor to have the Wall Street Journal call me up and request an interview in person. When I found out that the reporter wanted to fly in from Chicago to spend the weekend with me so, I was ecstatic. It was an awesome feeling. Soon after, however, I began to get nervous and then sick. I had never had someone so important want to follow me around for any length of time, let alone a weekend. I called every mentor I had. I called balloon artists, family, friends, and business owners. I tried to stick with people I knew had dealt with the press, but I could use an encouraging word from anyone I could get a hold of.

Below is one of the excerpts from the over 1,000 word entry.

“Finally he handed the birthday boy the finished product – a portrait of Luigi, a character from the Super Mario Bros. video game, complete with twisted brown mustache, green body, and white gloves. The boy smiled and asked him to autograph it.”

In addition to the written article which appeared on the front page of the Wall Street Journal, there was also an article online, a photo gallery, and a video.