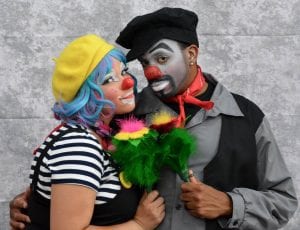 Take a clown to a party and everyone will have a blast. Clowns are a symbol of party fun especially for most kids around the globe. YTE Events’ special pratfall of clowns specializes in giving kids a fun time at parties. There are different types of clown that you can hire. Two of the common clown genres are the Auguste and Trapp clown

Comedy is the middle name of The Auguste clown. This has been labeled as the most comedic clown of all time. He goes bigger in his acts, put on wilder shows and is broader than all other performers. The Auguste clown is a troublemaker whose main weapon is slapstick comedy that allows him to pull off numerous big pranks.

The Auguste’s face is made up using a blend of various colors including pink and red. Instead of being white-faced, the Auguste clown’s face is tan. All other facial features are greatly exaggerated using red and black colors.  The mouth is also characteristically muzzled i.e. has a thick white outline. The costume of the Auguste could be a well-fitted grab or be something that is ill-fitting (either too small or too large). However, the costume always features large pattern designs, bold colors and vivid prints. It’s almost impossible to spot an Auguste clown without suspenders.

You’ve probably noted that there’s that one clown who cleans up after his or her comrade clowns. This is the Tramp or Hobo clown. This also is the low woman or man on a totem pole.  He or she has a tan face or is painted a flesh-colored pink. He also features a beard. The eyes and mouth spot a highlight of white around them.

The costume of a Hobo clown is usually tattered with many patches on it. The suit is often dark colored. Variations of this costume are simple sloppy coats that have numerous pockets or a simple vest with bright colors. The clown also puts on a silk or derby hat with no top finishes. A female Hobo clown is sometimes called the bag lady since she often carries a tattered bag.