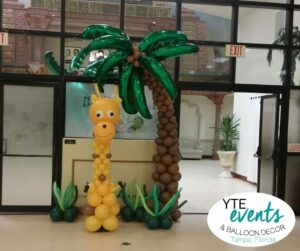 A rare sight out in the wild brought straight to the Indian Cultural Center in Tampa! Even though giraffes and palm trees don’t exist together out in the wild, this was a fun balloon sculpture scene to make for our client. Who wouldn’t want to be greeted at the door by such a friendly smile?

Both the giraffe and the palm were balloon sculptures we made for this amazing baby shower. The giraffe was made using golden yellow balloons, tied together and held by a hidden black base. His spots of mocha brown balloons we added to his pattern. Larger balloons were used at the bottom for his legs and body, as well as the head and snout.

The palm tree was made using alternating rows of large and small brown balloons, tied off to a curved base running through the center. At the top of the palm, long foil balloons created the iconic fronds of the tree. Light brown balloons at the center of the fronds form the crownshaft – the woody center where the fronds attach like on a real palm tree!

This was just one of many pieces created for this event and a fun way for folks attending the event to be greeted at the door!